Berlin offers a trendy city break, bursting at the seams with art, culture and music. Perfect for a weekend jaunt, luxury hotel options are surprisingly cheap, so there’s really no excuse not to jump on a plane and soak up the city. Summer is by far the best time to visit; achingly trendy art galleries have found homes in dis-used warehouses, street markets boast the best in fusion street food and the music scene is, of course, ‘banging’.

Flights from London speed you to Germany in no time (in under 2-hours no less). We can also rely on those Germans to keep a city so spectacularly clean. Idyllic parks and lakes frequent the cities and towns around the country and Berlin doesn’t disappoint. Take a walk through Tiergarten Park and explore Friedrichshain and Kreuzberg. There are a wealth of independent cafes and restaurants that have sprung up over the years and show off the excellent cuisine (and of course beer) on offer.

Berlin is my favourite city 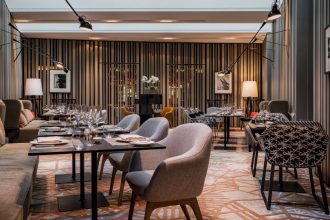 Right in the heart of Berlin, Das Stue is an exciting and whimsical haven for guests to explore the city. Located right by the lush Tiergarten Park, Das Stue is a short 20-minute drive from Berlin Tegel Airport. Located in the former Danish Embassy, the building is big and bold. Work your way through the tasting menu at their Michelin-starred restaurant, indulge in a Alpine-inspired treatment at the spa or head out onto the terrace for a drink.

From £177.72 per night (including a small bottle of Bollinger champagne in your room) 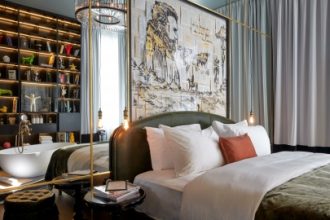 Located in the heart of Berlin’s art district in West Berlin, this 44-bedroom hotel is one of the slickest in the city. Tastefully designed with an eclectic flair, the hotel is named after the fictional bon vivant character Sir Savigny. We presume to encourage the local literati to make the communal areas their home. Their concept burger restaurant serves up the best steaks around. They even have a ‘Ring for Burger’ bell in each room. The added bonus being the small garden out back, perfect for the summer months.